March – Photos of the Month

March was an interesting Month with a couple of trips to Vancouver for some Rugby and Swimming photos which was fun. There were also some great sessions spent with the Canadian Mountain Bike and Rowing teams in Victoria as well as a portrait session with Jen Kish the captain of the Canadian Women’s 7’s Rugby team. I also got to know World Champion Mountain Biker Catharine Pendrel and was pleased with a few shots I got of the Victoria Royals hockey team during practice and their last regular season.

Each month I’m learning something new and this month it was how to set up and use strip lights. They have a nice effect when used the right way on the right person. My main source of inspiration to buy this equipment and try this setup came from Toronto photographer Mark Blinch who turned me onto Los Angeles based photographer Dustin Snipes. Jen Kish, captain of the Women’s Olympic Rugby 7’s team poses for a portrait at the Pacific Institute for Sport Excellence in Victoria B.C., Canada on March 3, 2016. 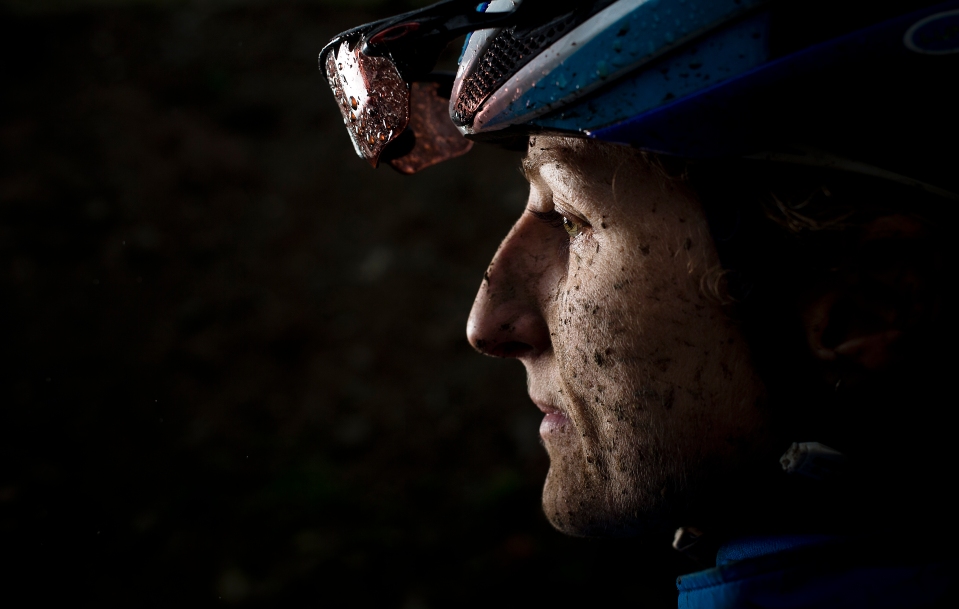 For the Catharine Pendrel shot I secured a golf cart from Bear Mountain Golf resort and put in a Paul C Buff soft box with a White Lightning™ X1600 Flash Unit powered by a Vagabond™ Lithium Extreme attached to a light stand heavily weighted down with velco weights I bought at the SOS thrift shops in Parksville B.C.

It was rainy day which is what I was waiting for but it did make things a bit more challenging keeping the flash unit and my camera’s dry. But I accomplished what I set out to do which was driving the cart to the location the riders were training and shooting them in their natural environment with a strobe. 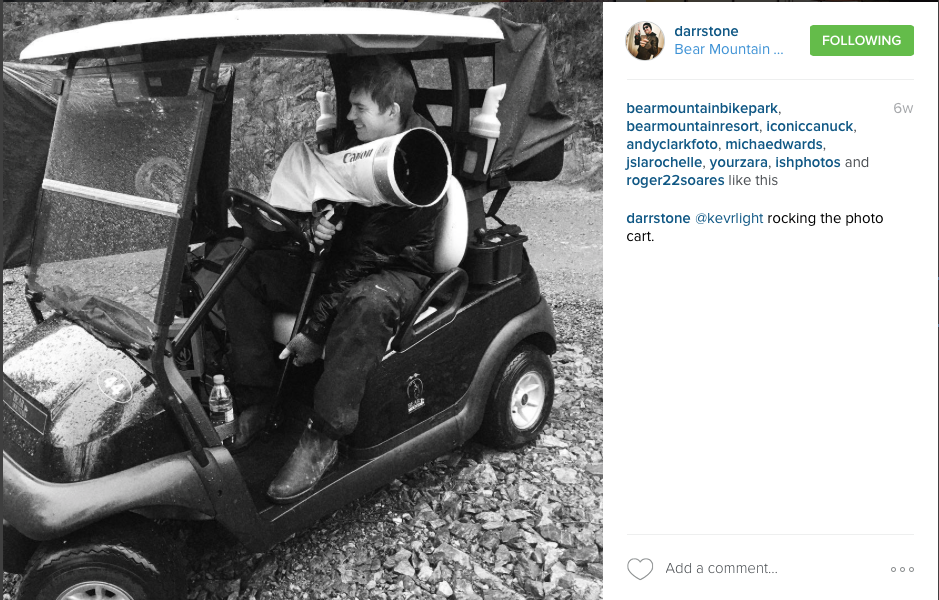 Thanks to Times Colonist photographer Darren Stone for the photo. 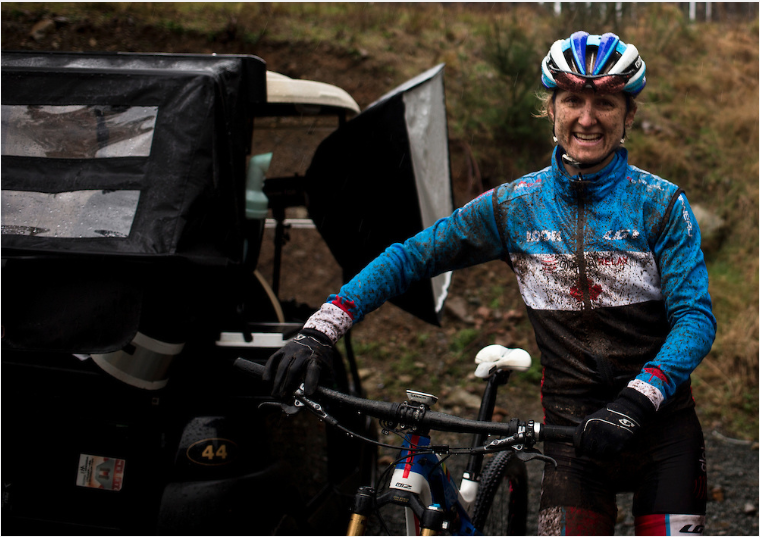 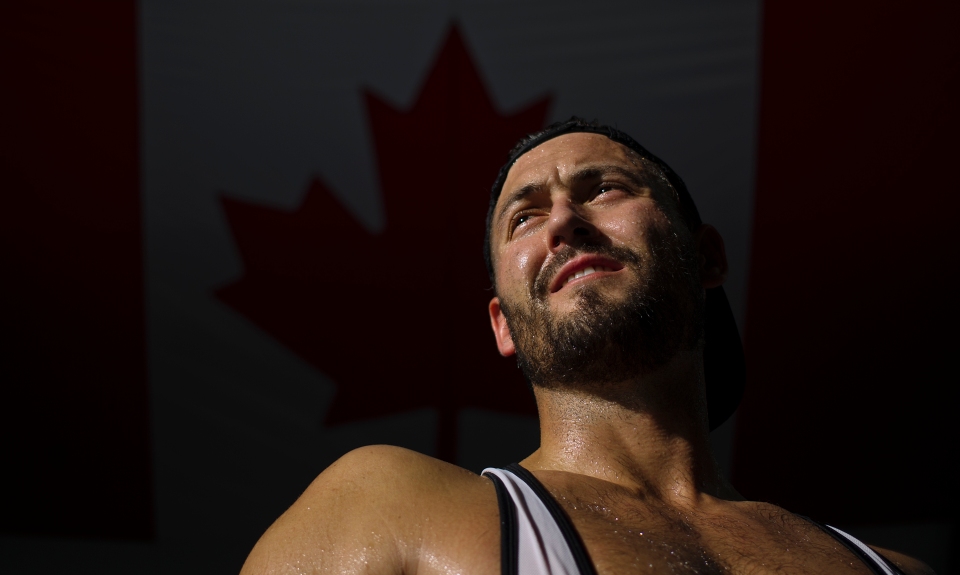 Rob Gibson, Canadian Olympic rowing silver medalist gets off the rowing machine following a team training session at the Pacific Institute for Sport Excellence in Victoria, B.C., Canada on March 25, 2016. 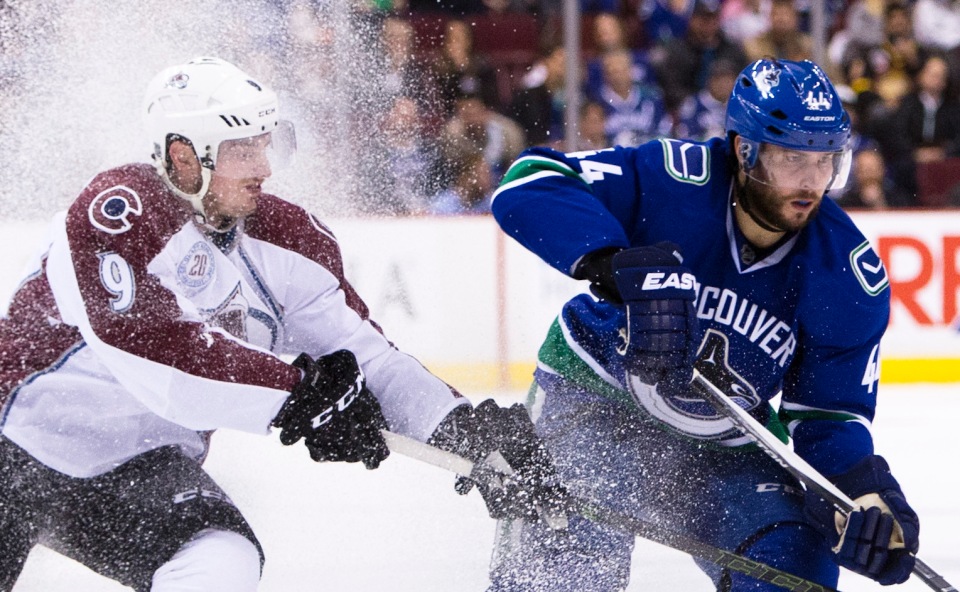 Victoria Royals goaltending coach Lynden Sammartino talks to Coleman Vollrath during a team practice prior to a game versus the Kelowna Rockets at the Save-on-Foods Memorial Centre on March 10, 2016. 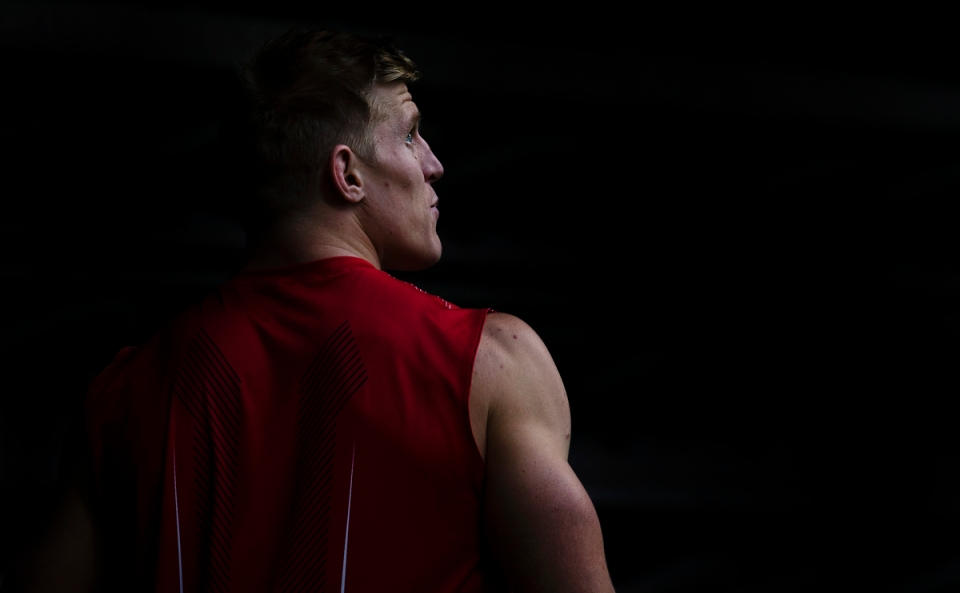 John Moonlight of Canada prior to a match versus Wales at the HSBC Sevens World Series XVII Round 6 at B.C. Place Stadium in Vancouver British Columbia on March 12, 2016. Canada lost the match 26-19.

Victoria Royals goaltender Griffen Outhouse walks through a crowd of fans prior to the third period in a game where the Royals beat the visiting Everette Silvertips 4-1 in front of a sold out crowd at the Save-on-Foods Memorial Centre in Victoria, B.C., Canada on March 19, 2016.

Spent a long time looking up as I couldn’t tell when the worker was going to come to the edge so I had to be constantly ready. It lead to a sore neck and a visit from the safety manager and what ended up being kind of a cool shot.

A construction worker grinds the edge of the 7th floor at the 31-story Aquilini Centre South tower in Vancouver B.C., Canada on March 17, 2016. 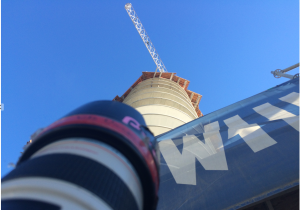 The view I had when I was greeted by Randy the safety officer and told to move back incase something fell off the building. I agreed and then he invited me to come up and take photos from the top floor next time I’m in Vancouver.

Tim Schrijver, Canadian National team rower and hopeful for the 2016 Olympic Games in Rio poses for a portrait following a team training session at the Pacific Institute for Sport Excellence in Victoria, B.C., Canada on March 25, 2016.

John Moonlight lifts Sean White of Canada during a game versus Russia at the HSBC Sevens World Series XVII Round 6 at B.C. Place Stadium in Vancouver, British Columbia on March 12, 2016. Canada would beat Russia 29-12. (KevinLight/CBCSports)

I had been waiting for these scene to happen for two years ever since I saw both variables happen individually. The players and sunset finally happened simultaneously when I was on my way to my in-laws house and the guys were nice enough to let me into the court and shoot.