The 1992 Canadian Rowing Team – The Reign in Spain

In November I had the opportunity to photograph the twenty-fifth anniversary celebration of the 1992 Men’s and Women’s rowing teams that represented Canada at the Olympic Summer Games in Barcelona, Spain.  I wanted to honour the heroes who helped pave the way for my athletic success and to do so, I had a vision of creating portraits of each member of the team as well as photographing their reunion row the following day. 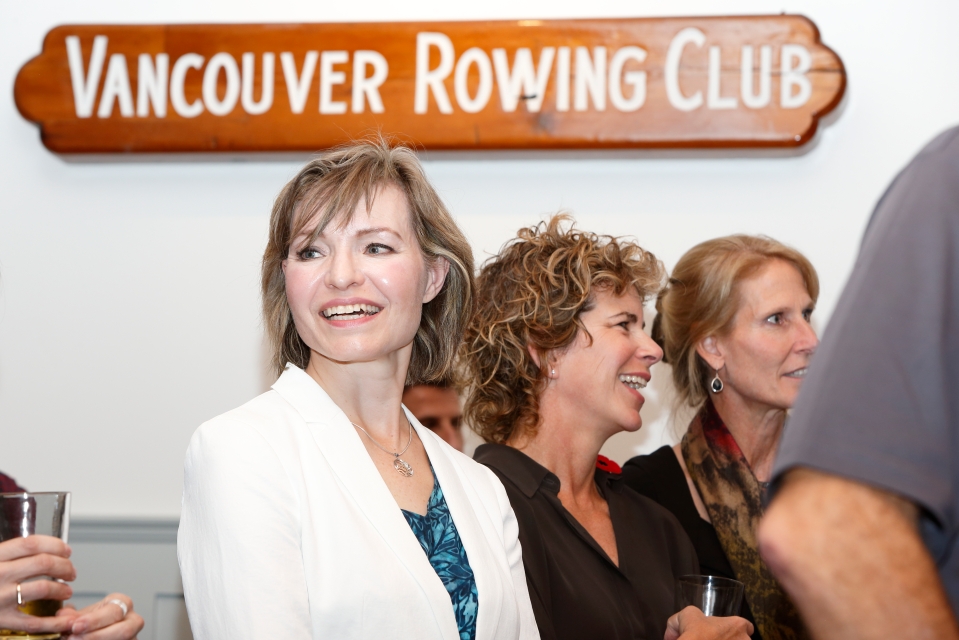 Kathleen Heddle and Marnie McBean during the 25th twenty-fifth anniversary celebration of the 1992 Men’s and Women’s rowing teams held at the Vancouver Rowing Club on November 10th, 2017.

1992 marked Canada’s most successful Olympic regatta to date and featured several outstanding Canadian rowers who would later become my heroes during my 12-year career on Canada’s National and Olympic rowing teams. It was images of these athletes competing at the Olympics that inspired me to pursue my dreams. Kathleen Heddle looks over at her competition with Marnie McBean in the bow.

As I think back to that time, there are two images in particular that stuck with me. The first was from Kathleen Heddle and Marnie McBean’s gold medal winning race in the 1996 women’s double sculls event. 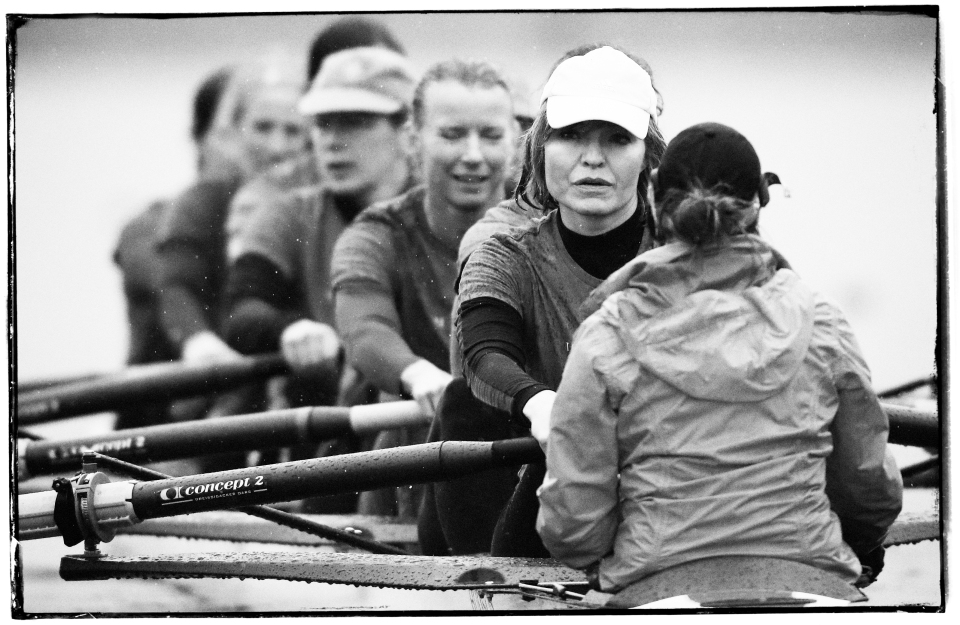 Kathleen Heddle sits in the stroke seat during a reunion row at the Burnaby Lake Rowing Club on November 11th, 2017.

In the video, Kathleen Heddle pulls on her oars, keeping her head straight while her eyes scan to check on the crews in the lanes next to her. Twenty-five years later it was beautiful to see that both Kathleen and Marnie still had that same killer focus in her eyes even during what was supposed to be a relaxing fun row. 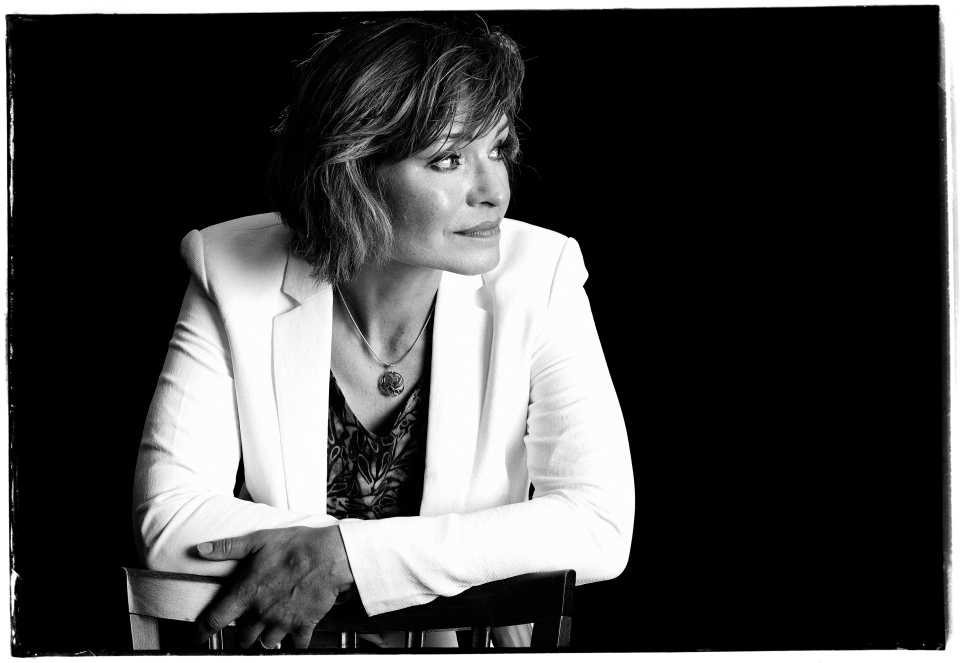 Kathleen Heddle poses for a portrait at the Vancouver Rowing Club on November 10th, 2017. 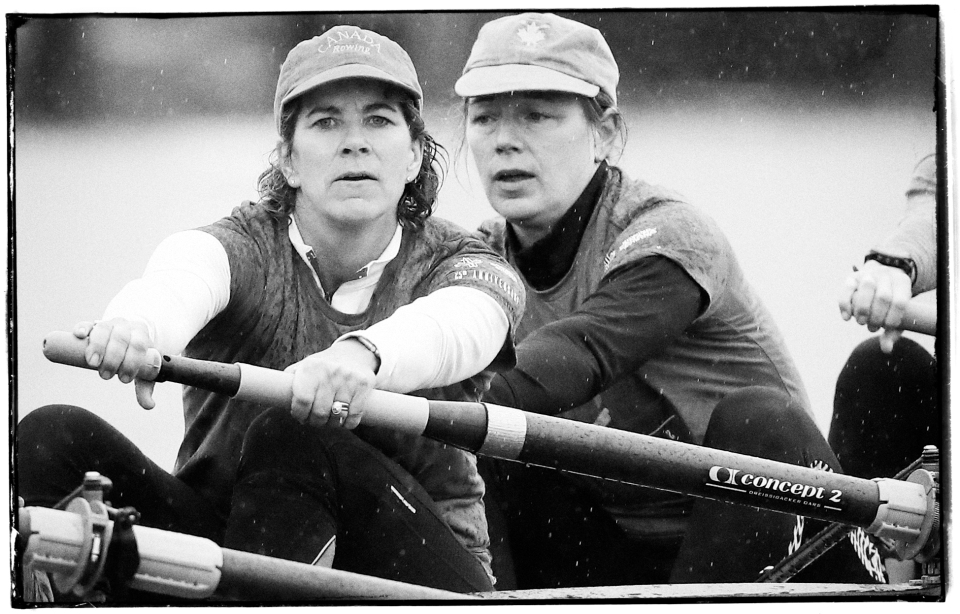 Marnie McBean focuses during a reunion row at the Burnaby Lake Rowing Club on November 11th, 2017.

Throughout my career, I would often watch this clip to remind myself of the calm but aggressive determination required to win. Marnie McBean poses for a portrait at the Vancouver Rowing Club on November 10th, 2017.

The second image that inspired me was a scene from the famous (in the Canadian rowing world anyway) “Honour and Respect” video that was produced about the 1992 Men’s Rowing Eight, and shown to me for the first time by my coach, Mike Spracklen, in 2001. In the scene, a fully bearded Mike Rasher comes forward on the recovery during a winter row on Elk Lake. Mike Rasher during a training session on Elk Lake in Victoria, British Columbia in preparation for the 1992 Olympic Summer Games in Barcelona.

The image resonated with me because I loved putting myself in situations that might make other people quit. This fully bearded giant of a man pushing through on a rainy and cold day on Elk Lake was an example of the physical and mental toughness I needed to have if I wanted to be successful rowing under Mike. 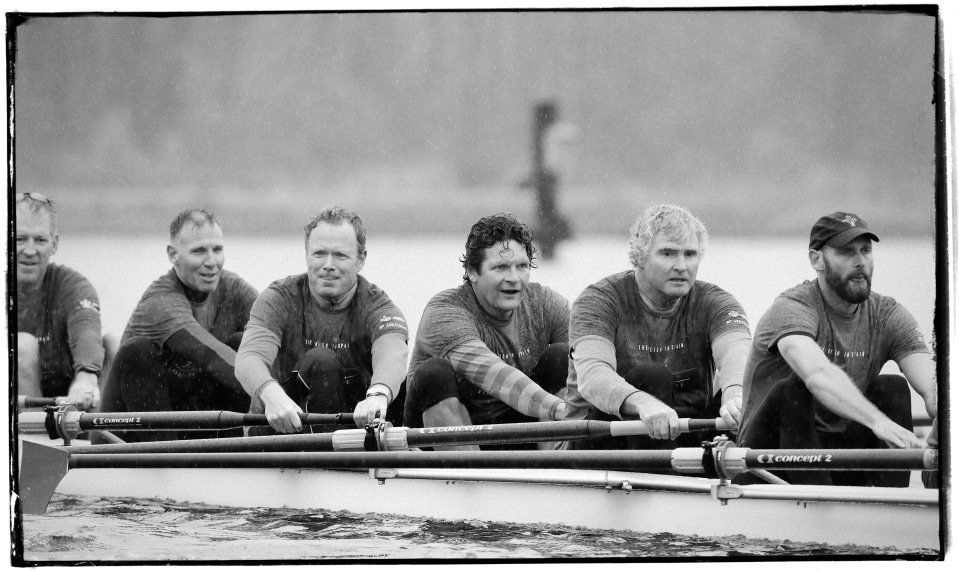 Mike Rasher sits in the five seat during a reunion row at the Burnaby Lake Rowing Club on November 11th, 2017.

These images helped inspire me to my own victories, but they also showed me the patience and perseverance required to weather the challenges I would face. Mike Rasher poses for a portrait at the Vancouver Rowing Club on November 10th, 2017.

I rowed for Canada in the stroke seat at the 2001 World Championships and again in 2002 at Royal Henley, beating the Germans and winning the Grand Challenge Cup.

The Canadian Mens Eight competes at the 2001 World Cup in Luceren Switzerland.

However, one week later at the Lucerne World Cup, we led for three quarters of the race but ultimately faded and finished third. When we returned to Canada, Mike moved me from the stroke seat to the two seat.

To many rowers and coaches this could be seen as a demotion. But knowing the history of how Mike had moved Derek Porter into the stroke seat and John Wallace into the bow seat weeks before Canada’s gold medal winning performance at the 1992 Olympics made me confident that Mike had a plan. 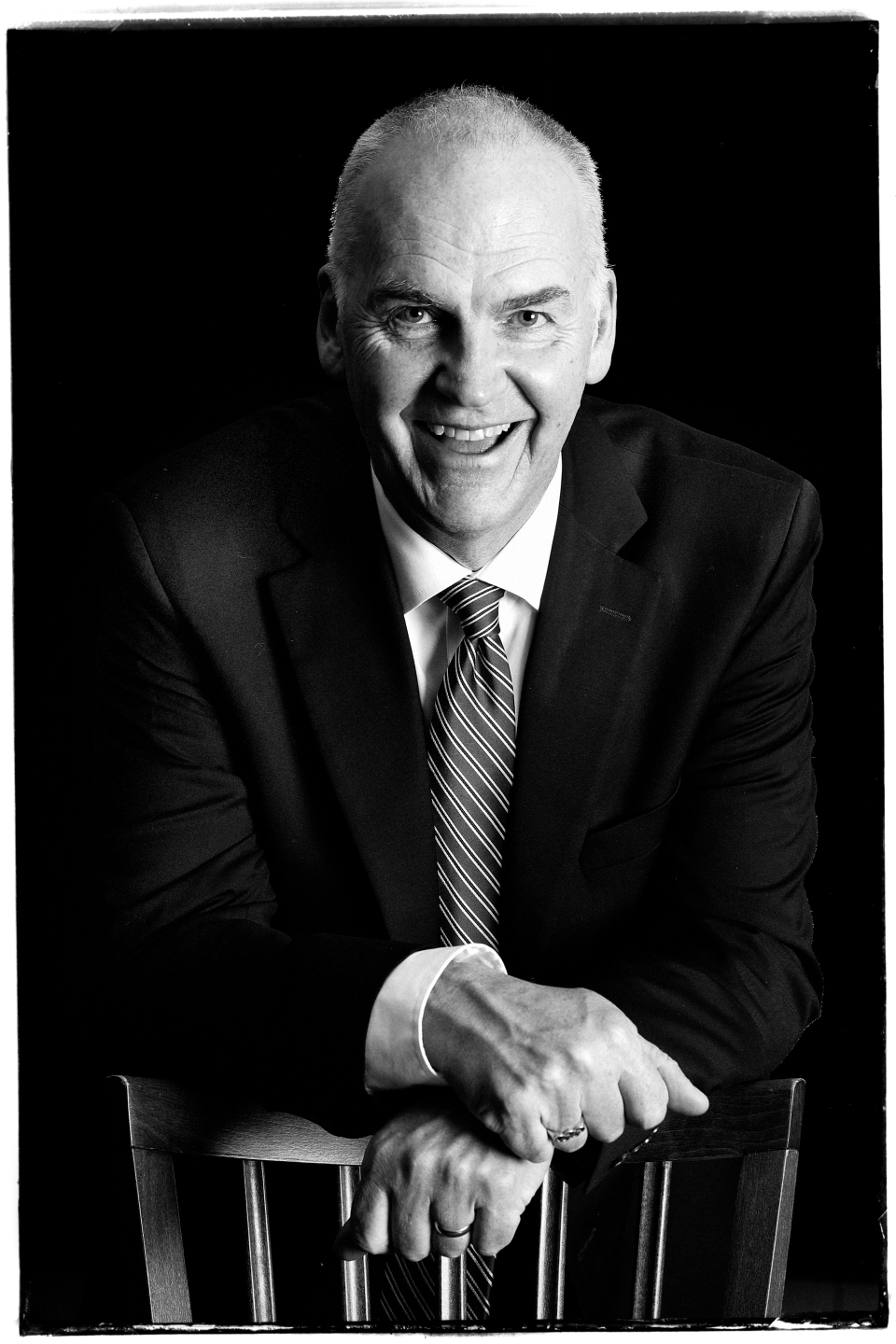 John Wallace poses for a portrait at the Vancouver Rowing Club on November 10th, 2017.

If John could do it and win, then I was going to do it and win, too. It took a few more years for me than it did for John, but ultimately we both shared an Olympic Gold medal rowing for Canada in the bow seat of a Mike Spracklen-coached eight. 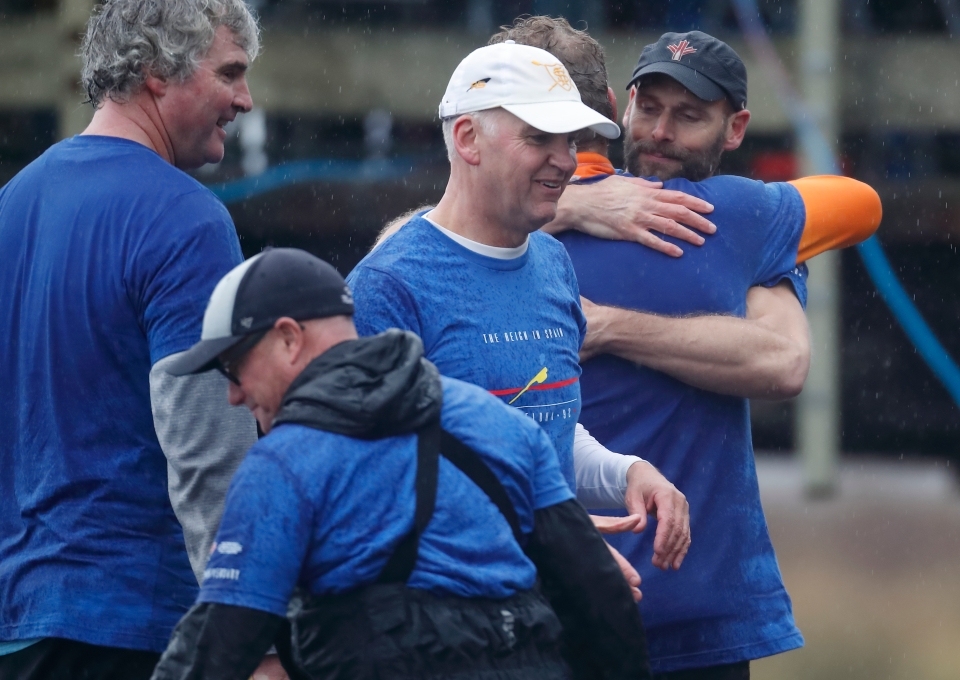 Derek Porter hugs 1992 teammate Rob Marland as John Wallace, Andy Crosby and coxswain Terry Paul get out of the boat following their reunion row at Burnaby Lake on November 11th, 2017.

With the addition of New Zealanders Dick Tonks and David Thompson to the Rowing Canada Aviron coaching staff I thought this was an appropriate time to reflect on my success and the heroes who inspired me to believe in what Mike was teaching me and the confidence to know that I could be successful at the world level. 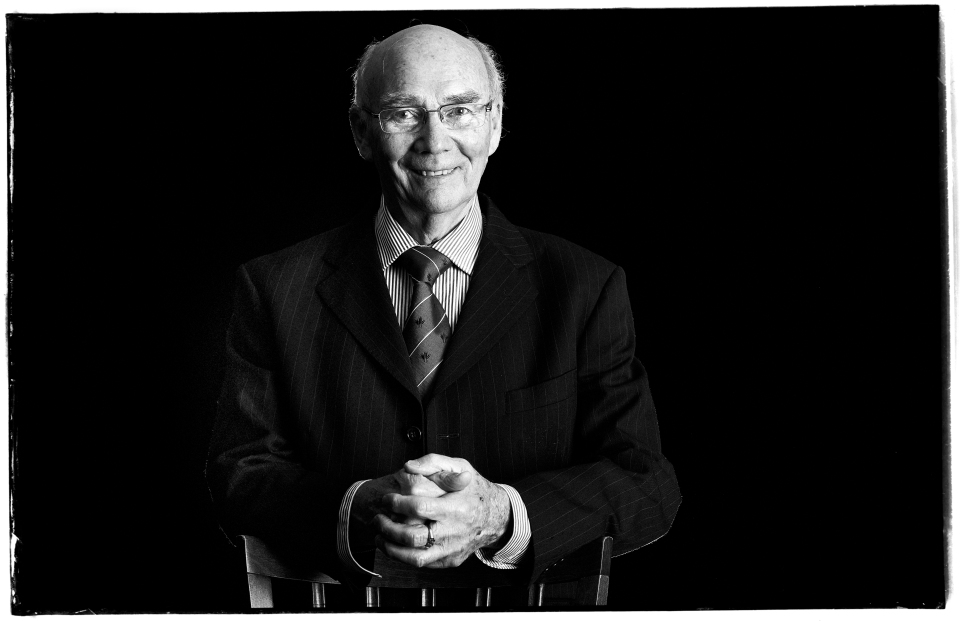 Mike Spracklen poses for a portrait at the Vancouver Rowing Club on November 10th, 2017.

I knew that if I did what Mike told me to do with as much effort and determination I could I would follow in the footsteps of my heroes achieving the same results they did. 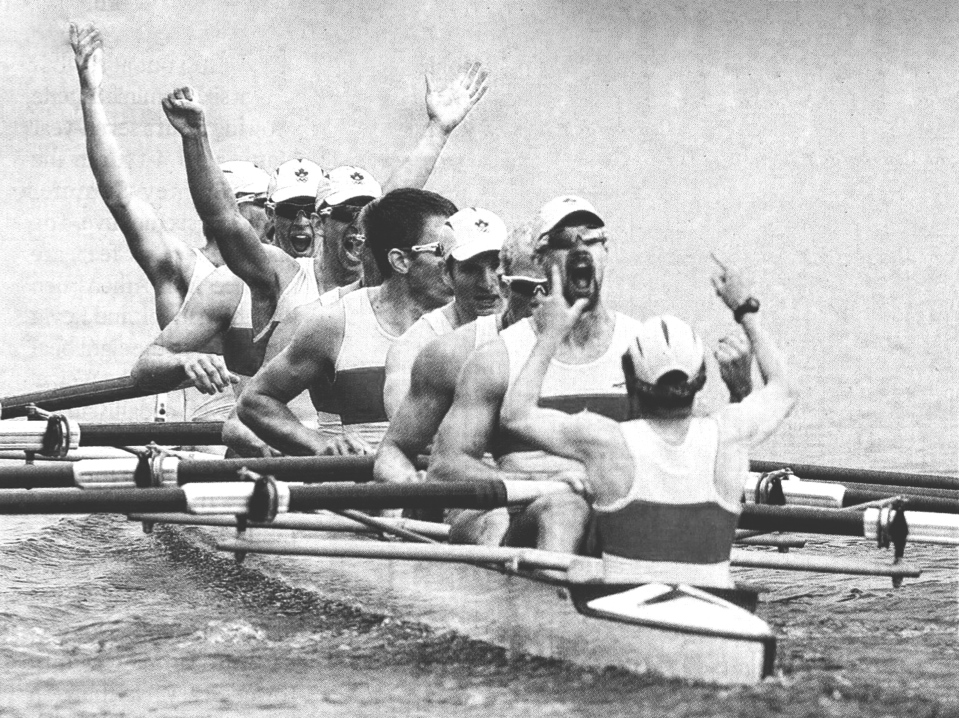 Thank you to all the members of the 1992 crews for creating images that made me believe that winning was possible, and allowed me to imagine myself in their place – both persevering through the tough times and celebrating in success. 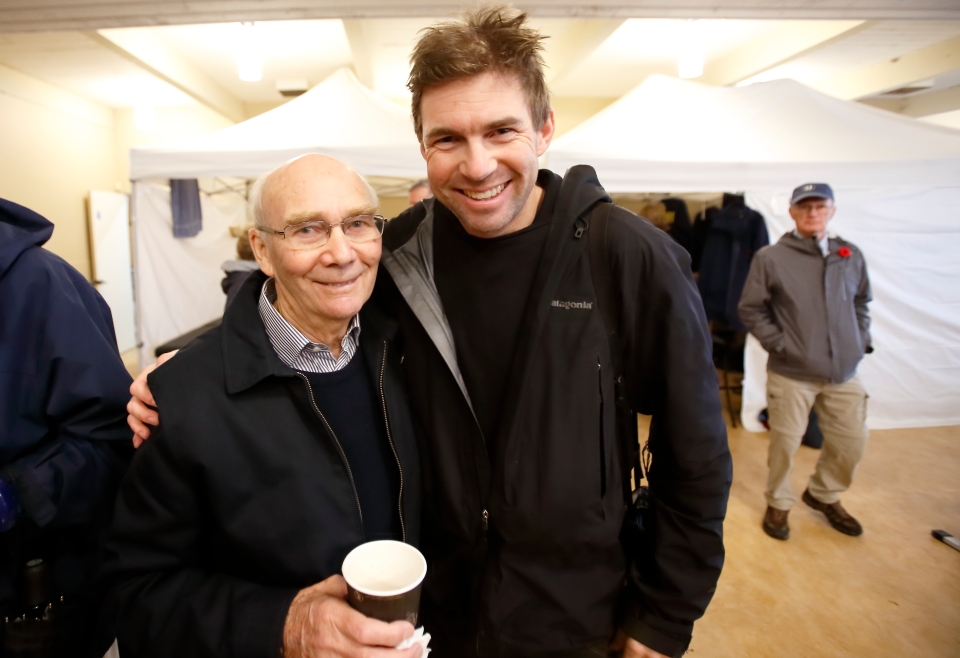 ← 2017 U SPORTS Cross-Country Championships
Behind the Lens : 2017 Year in Photographs →